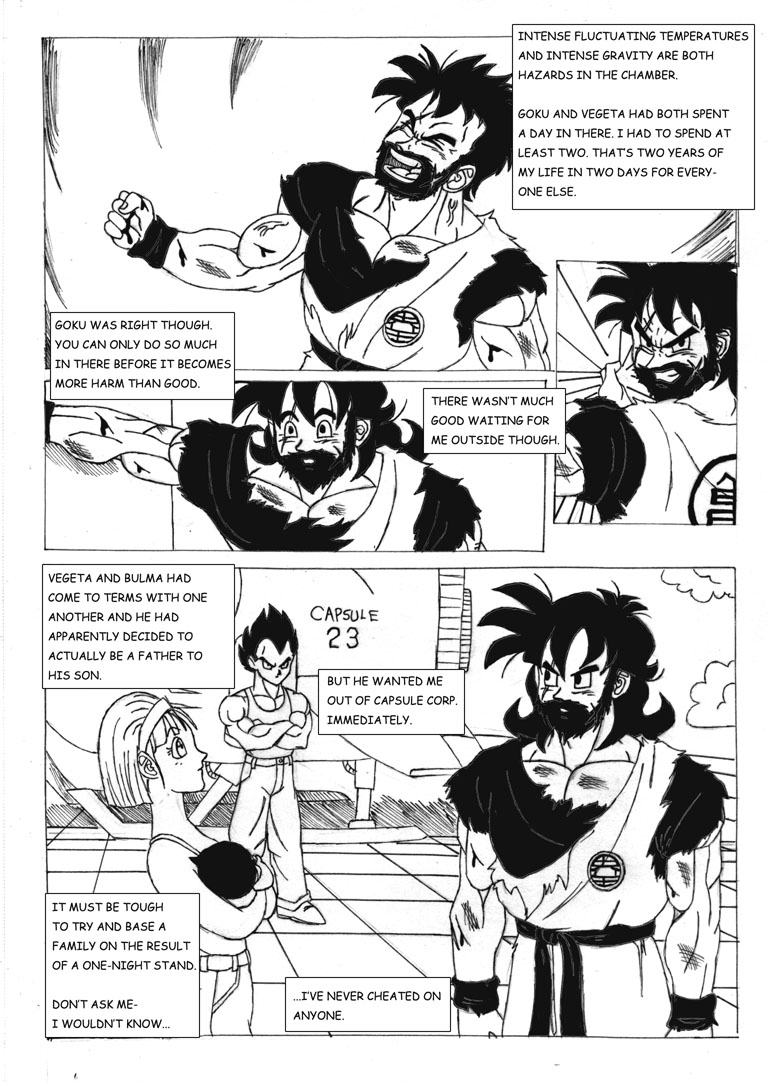 NamePendingCreations 4th Feb 2015, 11:06 PM
SHOTS FIRED FROM YAMCHA!
Edit Delete Reply
ImperialWrath (Guest) 19th Jul 2017, 5:50 PM
Not to nitpick, but I believe both Goku and Vegeta spent 2 days in the spirit/time room. Though Goku had done so back during DB I believe.
Edit Delete Reply
rod of stone (Guest) 13th Mar 2018, 12:51 PM
So, Mr. RMK, I suspect you do not subscribe to the "canon" or to better describe it more accurately, CHARACTER ASSASSINATION of Yamcha from Mr. Toriyama, because he wanted to give Vegeta more prominence to the story of his.

A lot of fans have made very strong points that Yamcha could not have been the one to have instigated infidelity on his relationship with Bulma, besides a baseball fangirl going all personal on him, him freezing in place awkwardy from his women phobia and Bulma walks on the scene and getting the wrong impression.

I would like to hear your opinion about it as well.
Edit Delete Reply
RMK 16th Mar 2018, 3:06 PM
This is a somewhat nuanced topic so bear with me.

Out of the many objections to my story that I've received, this page probably gets the most spite and accusation of being a "retcon".

When I wrote this, the only resource I had beside web forums for my information was the original Manga and the Anime. Based purely on these resources, I came to the conclusion, as you and many fans have said, that Yamcha was not a cheater and that Bulma was being dishonest, no matter what Trunks might have said. I came to that conclusion for a number of reasons:

The most obvious is that Yamcha's original stated dream was to get married. Yes, a man's dreams can change and he can also have a wandering eye. But infidelity didn't seem consistent with his repeat depiction over the course of years as a man who was only really comfortable around a woman who constantly showed her ugly side to him. Every other woman freaked him out.

However, the less obvious thing is that Bulma's irrational jealousy and accusations were a somewhat running gag. Starting in the Red Ribbon saga (Tale 69 to be specific), we see Bulma's mom remark that Bulma fought with Yamcha because she couldn't stand that he was popular with other girls. We also see Yamcha cut his hair and dressed up to make her happy. He was essentially a trophy boyfriend that backfired and he apparently wasn't doing anything right. Bulma yelling at Yamcha and Yamcha not understanding what the heck she's on about went throughout the entire series and even into the movies. My conclusion, like many fans, was that Trunks got his mother's version of the story which, as part of the aforementioned running gag, was what she had always told everyone. In other words, even the end of the world couldn't stop her from being petty. Although it absolutely sucked to see Yamcha sidelined and was definitely character assassination, I didn't consider it to be anything out of the norm way back then.

However, in recent years, it's come to my attention that supposed interviews with Toriyama and Toru Furuya illustrated that Toriyama intended for Trunks' comment to be taken as truth rather than a second-hand lie. This bothered me, not only because it was inconsistent with everything that came before, but it also appeared to be a genuinely calloused middle finger toward Yamcha and his fans.

On one hand, Toriyama is the author of Dragonball and what he says about the world goes, period. But just like George Lucas, that doesn't mean he can't make dumb decisions. That said, dumb or not, it's his work and he is more than allowed to ruin his own work. Toriyama is, by his own admission, somewhat lazy (I don't envy his production schedule back then) and it makes sense that, if he did indeed want to write Yamcha off as being some kind of jerk, a simple bit of dialogue would get the job done rather than a thoughtful prelude setting the fact up. A prelude would have been a lot of work. Thus the reality is, he made an executive decision about a character with no forewarning that completely contradicted what he wrote before for the sake of convenience. Vegeta, saiyan progeny, and popularity were what was more important. What frustrates me about this though is that, once the damage was done, Toriyama went back to insisting that Yamcha was nervous around girls (like his job at a Host Club). Can't have it both ways, man.

At first I thought perhaps I was looking too much into this or even that there was some subtle detail lost in translation that a Japanese audience would understand culturally. But then I read that both Yamcha and Bulma's voice actors were not only shocked, but voiced their complaints to Toriyama, who basically told them to just roll with it. If my own judgment was in question, it was reinforced by the fact that a man who was directly responsible for bringing Yamcha to life also thought Yamcha's depiction as a cheater was inconsistent.

As far as Elsewhere is concerned, I'm sticking to the source material. I can't retroactively edit my comic every time someone pulls up some obscure interview outside of Dragonball itself. One interview says he's a cheater; one says he's still nervous--which is it? Yamcha can't be a cheater and yet still be nervous around women no matter what the interviews say.
Edit Delete Reply
rod of stone (Guest) 17th Mar 2018, 5:15 AM
Yes, corerct, please check the comments on this thread for more confirmation.

Another point to consider that I had forgotten is a matter of translation. I had read different translations of Trunks' comments in various spots. Specifically, that rather than speak of "cheating", Trunks said Yamcha was fickle/non-committal. Supporting this could be a panel Toru Furuya held in an American convention where his aforementioned exchange with Toriyama was translated that "Yamcha has many hearts".

Whether that is a polite euphemism for infidelity and playboyishness, or really means Yamcha was fickle is up for debate with people able to read the original Japanese. I think fickle fits much better if it's true, especially if his options were limited to Bulma haha.
Edit Delete Reply
Shaded (Guest) 13th Jan 2019, 9:31 AM
I agree! Yamcha is never depicted as the cheater Bulma and Toriyama write him off as. You have my support!
Edit Delete Reply
Guest 29th May 2019, 8:51 PM
Dude don’t trust what Toriyama said, his stuff contradicts what he says. Yamcha is not a cheater and he didn’t cheat on Bulma. Even Toriyama stayed that yamcha will never get a girl because he’s still afraid of women. And the Japanese voice actors of Yamcha and late Bulma even went up to Toriyama and asked him why did he change Yamcha’s character? And Toriyama replied with "Come on, Yamcha is a cheater" in a peter griffin lik expression.
Edit Delete Reply
Bombadouken (Guest) 9th Nov 2020, 4:29 PM
Everything you said sir is 150% on the facts. I want to add that Bulma was flirts with other guys and making moves as well. But she doesn't be called a cheater. I also believe that the whole reason for Akira toriyama purposely character assassinate Yamcha's character just because He need a female character to bear Vegeta's Child because Trunks was very important. Since Bulma was the only option, he decided to go with that. And the biggest problem and to me is the most unfair, is that many people who hates Yamcha knows that and still treats him like he's a cheater and a joke.
Edit Delete Reply
Dutchnamekian (Guest) 26th Dec 2020, 1:54 PM
Remeber on namek she would fall head over heels for zarbon
Edit Delete Reply
No (Guest) 20th Apr 2021, 1:28 AM
She should be called a cheater dude.
Edit Delete Reply
Antonio (Guest) 9th Jul 2018, 6:44 AM
You’re awesome, keep up the good work and may you be blessed with much fortune and luck throughout your life
Edit Delete Reply
Dutchnamekian (Guest) 26th Dec 2020, 1:52 PM
I am a huge fan of dbz and super (i am Just glad i can enjoy Dragonball again)
My fav char ar piccolo and yamcha its become to much of a Saiyan rest imo this is Just awesome keep it up looking forward where this Will taken yamcha your Art is great and uu understand the comic undertones wich made db so fun

Edit Delete Reply
N (Guest) 20th Apr 2021, 1:28 AM
Yamcha doesn’t need to be a Saiyan
Edit Delete Reply
tokyoking2 (Guest) 12th Feb 2021, 4:25 PM
This is one of my favourite panels. Yamcha has always been a loyal friend and lover to Bulma. Throughout DB, it was Bulma who displayed flirtation tendencies, and in Z she was even aroused by Zarbon. RMK really does justice here to Yamcha, as like others here, I also suspect that it was in fact Bulma who cheated on Yamcha.

Making Yamcha into a 'cheater' is simply inconsistent with Yamcha's character development in DB. I honestly believe Bulma was the only person Yamcha truly ever loved. During the android arc, Yamcha was clearly frustrated after she revealed to Krillin, Trunks was Vegeta's child. In all likelihood, Trunks might have been the result of a one night stand. Why? Yamcha and Bulma had developed a relationship throughout DB which ended at some point during the andriod arc (whilst everyone was training).. This means that Bulma threw away a relationship which probably spanned for around about 10 years for Vegeta? One must also ask how did Bulma and Vegeta all start because they had no relationship prior to the andriod arc. The whole Bulma and Vegeta thing "appeared" out of nowhere.
Edit Delete Reply
Post a Comment